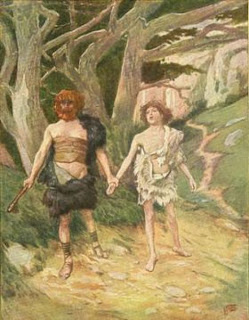 Religious texts reveal little about Abel other than the fact that he was murdered by his older brother Cain. Indications are that Abel was a kind boy who greatly respected his parents and worshipped God. When it came time to offer animal sacrifices his offerings always seemed to please God. The offerings of Cain were less pleasing to God. Abel was blessed with a joyous spirit. Cain was cursed with a muderous jealous spirit. Lucifer Chronicles parchments seemed to have shed a light on this controversial mystery.

It makes sense that the first son of Eve was actually fathered by Lucifer not Adam. This would fully explain the dysfunctional DNA traits not present in Abel who was the actual son of Adam. Lucifer was able to persuade Eve to partake of the forbidden fruit because the two of them were lovers in the Garden of Eden. The first adultress in history was unable to bear children until ingesting the fruit. This was a pre puberty time for her and Adam. Chemicals in that fruit triggered the process known as the reproduction cycle.

Abel Was Only A Boy With Childlike Qualities

The youngest son loved his parents and brother dearly but he loved God even more. His praise and worship of God was neverending. This constant worship was an irritant to Cain who despised his life of hard work and blamed God for all the ill fortunes actually thrust on mankind by the decision of Eve. Cain was not the only hater of Abel. Luicifer had a special hatred for the young boy. Lucifer knew the descendants of Abel would be selfless followers of God which was something which angered him tremendously.

Lucifer Could Not Kill Abel But Cain Could

God expressly forbid Lucifer to physically harm Adam, Eve, Abel or Cain. This unbreakable rule was actually in place for all angels since the creation of Adam. Lucifer was actually the only angel granted special permission to communicate with the humans. It was a compromise enacted by Lucifer which paved the way for creation in the Garden of Evil and not in Heaven. That special exception led to the successful temptation of Eve, the utter stupidity of Adam and the eventual murder of Abel.

God continued to dearly love his angels but decided to create a being in His image. A discussion pertaining to this matter ensued between God and Lucifer (missing portions of parchment leave this historic exchange and voids in timeline). God gave audience to Lucifer in this regard but did not alter His decision to follow through with His plan. (Lucifer Chronicles Eve Creation)

Angels Not In Image Of God?

A question which is not all alluded to at all in the early text pertains to the physical appearance of angels. God reveals His plan to create a species in His image. This rather mysterious statement seems to indicate that angels were not formed in His image. It is already known that angels do not possess souls per se as humans. Angels are immortal nonetheless. Good angels in Heaven. Evil angels in Hell. The latter are more commonly referred to as demons. (Lucifer Chronicles Eve Creation)

Abel Only First Of Many Murder Victims

Lucifer was able to manipulate the mind of Cain by turning jealously into a murderous jealous rage. Cain seemed to hate his brother from birth. Cain was jealous that he was no longer an only child. The older brother was irate whenever Abel was praised for anything. Cain was particularly incensed when God chose the cheerily given sacifices of his younger brother over his. This jealously eventually led to the first murder. The killer then blatantly lied to God about the deed. Perhaps Lucifer was right about mankind all along!
Posted by Stendek at 9:22 AM