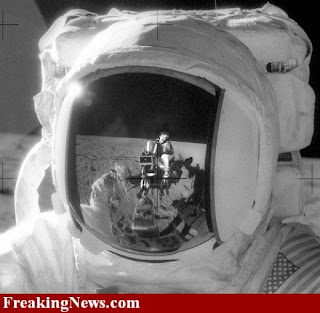 Distances Involved Simply Do Not Add Up At All

I receive several letters from Apollo believers on an almost daily basis telling me that I am completely wrong, however, consider this. The distance that Man allegedly had to travel to get to the Moon was the equivalent of 30 Earth diameters. Now compare that with the greatest distance that Man has travelled since then (in the Shuttle) which is 400 miles. That is the equivalent of just half an inch from the Earth compared to the distance travelled to the Moon.

Werner Von Braun said in his book 'Conquest To The Moon' (published in 1953) that it would be impossible to send anyone to the Moon because of the sheer size of craft needed to do the trip. In fact, taking Von Braun calculations into consideration, a spaceship that needed to travel that distance would have had to be 266 times bigger than the Saturn 5.

Also consider the recent announcement from NASA that it would take scientists 15 years from now to design and build a craft to go back to the Moon. Why when we have allegedly been there six times already? John F Kennedy announced in 1962 that Man would travel to the Moon by the end of the decade. Just seven years later Man allegedly did just that.

Layers Of Lies Finally Catch Up With Corrupt NASA

But more than 35 years later in a world that is vastly technologically superior to the 1960s. Why would it take over twice as long to do the same thing today?
Posted by Stendek at 4:04 PM